The SN story began in 2003 when founder, Michelle Bliss, an international school teacher on a leave of absence from her teaching job in Frankfurt, Germany first visited Nepal and decided to help a family with 5 children living just outside Pokhara. She found sponsors to cover the costs of educating the children at an English medium school and returned to Nepal regularly over the course of the next 10 years to follow the progress of the children, and supported by the friends and family who accompanied her each time, provided educational sponsorship for more promising children and young people.

A turning point came in 2011, when a family crisis occurred and 4 of the sponsored children found themselves without a home base which would allow them to continue their secondary level education at English medium schools. Roshan Gautam, one of the 5 original sponsored children, now chairman of SN and manager of The Garden, took on the responsibility of caring for these children who spent the next 2 years in school hostels until a suitable rental property was found in 2013, and The Garden came into being. In the same year, 2011, Michelle Bliss left her final international teaching position in Kuala Lumpur, Malaysia, to help Roshan take care of the children, find a property, and set up a home for those in need to also serve as a centre providing educational, social and emotional support for all the sponsored children.

In September of 2013, 8 children moved into The Garden along with Roshan, as manager, a house mother, Dilamaya Jujali, and her husband, Jyendra.  All 8 children were enrolled as day pupils in 2 local English medium schools.

Shortly afterwards, Sansar Nepal (SN) was registered in Nepal as an educational non-profit NGO (non-governmental organisation) chaired by Roshan Gautam.  A local board of 7 members was formed by Roshan, supported by Michelle and a small group of international sponsors and mentors.

Between October 2013 and May 2014, the house was simply furnished and equipped to accommodate the children and their care-givers, and extra rooms were prepared for guests and volunteers. During this stage, the main challenges were to look after the children and to provide sufficient supplies of electricity and water consistently. There were up to 14 hours per day of no electricity (due to “load-shedding”) during the winter months! Fortunately, it was possible to install a solar back-up system to power one emergency light per room, which enabled the household to have a continuous internet connection. A number of repairs had to be carried out in order to make the house habitable, including digging up the patio to connect pipes to the sewage outlet! Before the arrival of the monsoon, the children planted vegetables and fruit trees in order to reduce food costs and move towards greater self-sufficiency.

During this phase, the rest of the house was furnished and equipped to include a resource centre / library, a study room, a large kitchen-dining room and a lounge. At this stage, we also extended our educational sponsorship to a number of other local children and welcomed them at The Garden to share our facilities and participate in our activities. An additional guest room was prepared to accommodate our first OWPs and as a small source of income for the running of the house.

In this phase the outside areas were developed. Simple bamboo greenhouses were built on our adjoining field to provide food for the house, along with a composting area, and vegetables were sold to recover costs. With the help of various OWPs, a badminton area was added, as well as a chicken and rabbit house, and play areas for the children. A fire pit was also built.

We also installed a solar-powered backup system to provide lighting during the prolonged electricity cuts and run the Wi-Fi.

When the first major earthquake hit Nepal on 25th April 2015, SN immediately engaged in emergency relief work, supporting local Nepalese individuals and groups with funding, sourcing and delivery of essential supplies. We continued this relief work throughout the winter, launching a “Warmth for Winter” appeal to provide warm clothing and blankets for children and vulnerable adults in stricken villages, and in a refugee camp.

In March 2016 we commenced our support of young Nepalese change agents by sponsoring an educational workshop programme at two local schools in Pokhara, which were presented by Psychbigyaan Network Nepal, [G1] an NGO founded by psychology graduate, Kripa Sigdel, which promotes emotional and mental health and emotional wellbeing for young people.

In November of 2016, the Psychbigyaan team returned for follow up visits and workshops at the local schools hosted by SN. They have successfully taken this programme into other schools in Kathmandu and continue with this important work, educating teachers, parents and students about mental health and wellness. In November 2018 the team returned to participate in a 2 day workshop for teachers, youth workers and teenagers at The Garden entitled “Emotional Well-being for Global Peace.”  Another presenter was Sri Ram Timilsina, a former teacher and inspirational changemaker, who now leads workshops on Non-violent Communication throughout Nepal.

In February 2017, we hosted a dental camp at The Garden for almost 400 children, the majority of whom came from villages we had supported during the earthquake. Checks and treatment were provided by a team of Taiwanese dental students.

In 2017 we also began supporting Sri Bijaya School in Dhawa village. This was the school that some of our young team members attended at primary level. It was also the start of our ongoing relationship with Ivy Collegiate Academy, Taiwan, who donated funds during the earthquake and decided to support this project though us.  Our first project was sponsorship of the school’s English teacher for 1 school year. In 2018 we installed a simple kitchen so that warm food can be provided for the children in the midday break. We also built an add-on shower and hand-basin to encourage better hygiene at the school. We also provided computers and a printer as well as teaching materials and supplies.

In 2017 our guest rooms were renovated and an electric shower added to the guest bathroom to ensure hot showers for guests staying at The Garden during the winter months.

In 2018, our international team was joined by Bea Toews who took over the management of our finances and is currently engaged in the updating of our website, and Michelle Djekic who initiated and is leading the development of a strategic plan.

A sewing room was set up and equipped in the space adjoining the downstairs lounge in the early part of 2018.

In 2018 we also conducted a survey of Dalit women in Kaskikot, another community with a connection with our young team members and began to plan a possible sewing project at the village.

[G1]We should add hyperlinks for all organisations mentioned

This Is What We Do 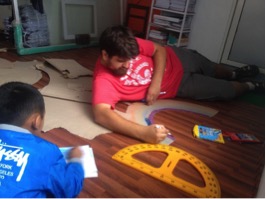 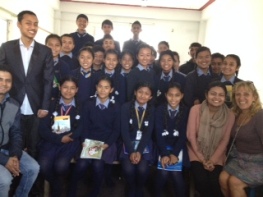